Since a few weeks I have a Motorola Milestone, the European version of the Motorola Droid. For a small computer/handheld works very well. I can browse, use email, install application, write documents. As a phone the device fails. 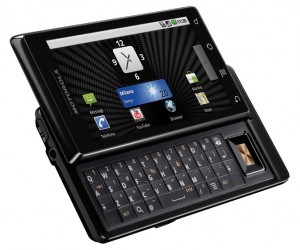 There’s a lot of talk about the IPhone 4 supposedly having bad reception. Well, the Motorola Milestone has a problem too. When calling, I very often incidentally put the telephone to mute, which causes the other party not to hear me anymore. This is caused by the mute button in the middle of the touch screen. I often press is that area with my hear while calling, as I have the habit of putting my telephone to my ear… Well apparently few people in Motorola though of that.

The Motorola Milestone has a proximity sensor that supposed to turn of the screen while calling. However, for me, that doesn’t work. I searched for a solution on the Motorola forum. There a quite a few threads about this issue, like this, this one, this on long hair and this one saying it’s a hardware problem.
Many answers are infuriating rather than useful. Most of them have tips on how to properly hold the phone (in your right hand, below ear lob, under your hair). Arg, that’s not what I want to hear. Apart from the fact that doesn’t work, I don’t want a whole instruction who to hold my phone when I’m using a mobile phone for over 10 years.
Some idiots even say they have the problem, but still love the Droid.

At least some sort of official person who sorts of answers to the problem. People at Motorola are working on an update.  That’s not of much help. Finally, in this thread I found a more useful answer. There’s an application called Screen Suite, which allows you to lock the screen while calling. It only costs $1.99. Bought it already, I have the phone to long to get my money back. I just installed the application, Screen Suite seems to work.

Well bottom line, Apple isn’t the only one with a problematic telephone. And avoid the Motorola Droid and Milestone, at least when you also want to make phonecalls with your smartphone.